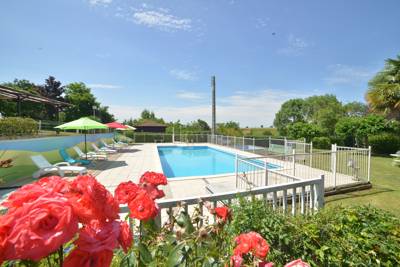 Rural camping in the Midi-Pyrénées, surrounded by sunflower fields and an easy drive from historic French towns
A healthy tan, a nice dose of vitamin-D – there’s much to be said for sun-seeking. And if you’re one who needs an excuse, just look to nature. It’s a part of our natural evolution. Like a field of sunflowers in the Midi-Pyrénées turning from east to west as the day goes on. Or like the leaves of the fig trees tilting in the afternoon light as they bring themselves to fruit. As the hippies would say, “it’s all natural man. It’s all natural”. So while during the winter months Country Camping may close the gates for a little shut-eye, come the beginning of April campers seem born to trickle back again – human sunflowers coming down from the north to catch those revitalising rays.

Nonetheless, that the Midi-Pyrénées is often dubbed “Toulouse and the Midi-Pyrénéan Desert” is something of a misnomer – a reference not to the heat but to the relative absence of activity in these parts compared to the bustling city an hour's drive away. There’s a definite rural feel, a landscape that is home to more farms than any other region in France. And it’s this quiet rusticity, this peaceful countryside charm and pastoral joie de vivre vibe that Country Camping is very much a part of.

In springtime, catch the last of the colourful blossoms as they’re replaced by cherries dangling appetisingly from the trees. In autumn, it’s the peaches, like soft, velvety fists, ripe for the picking. Whenever you come, the shady trees that enclose the 20 grassy pitches provide a natural, green feel that’s in keeping with the pastoral French surroundings. The best spots are actually those with the slightly lower hedges, the gaps revealing views across the neighbouring field and partially wooded valley.

Those looking for a little more luxury can try one of the three, fully furnished safari tents onsite or the wooden bijou chalet. Yet the real comfort of this campsite is the easygoing atmosphere it affords. A small outdoor swimming pool sloshes around under the energy of younger campers, overlooked by the chilled-out bar terrace where quieter kids are setting about a nerve racking game of giant outdoor jenga. After that try the neighbouring stretch of woodland, somewhere to build dens and search for dragons and gruffalos – though the ones around here are French speaking, so kids may have to brush up on their vocab before any unexpected encounters.

In all it’s these simple pleasures that make Country Camping such a great campsite, independently of the pleasant attractions nearby. It’s an easy cycle to the old military village of Saint Ybars, while a drive to the spectacular natural park Pyrénées Ariégeoises provides an endless list of outdoor activities to try. But while these exploratory day-trips reveal the place to be anything but a desert there’s something just as charming about a lazy afternoon back at base, frolicking in the pool and enjoying the ever present necessity of the sun.

All pitches have electrical hook-ups available. There are 3 large, 2-bedroom safari tents. Each have a living kitchen area with a gas hob and refrigerator, a shaded veranda and can accommodate up to 5 people. Bed linen and cooking utensils are provided. There are 2 shower and toilet buildings, washing-up facilities, a disabled shower and toilet and a washing machine (€6 per wash). The campsite has a swimming pool with decked sun terrace, boules court, bar and terrace, BBQ area, volleyball court, children’s playground with outdoor table tennis and Tarzan rope swings. Childrens' activities are sometimes run. They include painting, clay modelling, treasure hunts, boules competitions, glass painting and jewellery making. Wi-Fi is available.
The Pool will be open from 16th July till 31st August.

The region has a host of interesting cities, towns and villages to visit, lively and beautiful Toulouse (1hr drive) and historic Foix (50mins drive) overlooked by an ancient castle (0033 5 34 09 83 83) are amongst them. Closer at hand the nearby fortress villages such as Saint Ybars (10mins away) and Carla-Bayle (25mins away) are also worth a visit. Take the family White-water canoeing on the Garonne, challenge yourself to climb the areal walkways of Sequoya adventure park (0033 5 61 68 51 51) or try horse riding through the local countryside. For the best of it head to Parc Naturel Régional des Pyrénées Ariégeoises (0033 5 61 02 71 69) a half hours drive away and the most scenic spot for outdoor pursuits and wildlife watching.

Country Camping has a cheerful bar that provides a variety of drinks. On Saturday's they provide a BBQ held on the terrace overlooking the swimming pool where campers can enjoy a selection of meats and fish. Thursday is pizza night cooked in their outdoor wood fired pizza oven and Tuesday sees a freshly prepared 3-course repas, usually served in the bar or under the sun shades outside. Elsewhere there are nearby markets in Auterive and Carla-Bayle, the best places to go for fresh local goods.
Unfortunately there will be no food served in 2021.

Country Camping is a family run business, located in the Midi-Pyrénées, in the South of France, nestled between sunflower fields and surrounding woodland.

The site is shaded by a variety of trees, a large number of which bear seasonal fruit. Help yourselves to cherries in Spring, plums in Summer and figs & peaches in September.

We offer a traditional holiday experience, whether your preference is the peace and tranquility of nature or simply enjoying the delights of historic French market towns. Just breathe in the wonderful fresh clean air of this unspoilt part of rural France. For your children there is a pool, play park, activities and games or alternatively you can let them freely explore the natural environment at Country Camping, build dens, play hide and seek in the woods, look for glow-worms and make new friends.

Come and sample rural France. Visit nearby markets with their abundance of local food and wine. Participate in the numerous village and town festivals held throughout the summer, where you can eat, drink and dance or enjoy sitting back taking it all in.

Visit the impressive Pyrénées where you can walk, cycle or just sit and admire the magnificent views. Or take a trip to Andora, nestled in a valley in the towering Spanish Pyrenean Mountains, where you can eat in one of their pavement cafes or restaurants then take a stroll round the numerous duty free shops.
The Pool will be open from 16th July till 31st August.
Read More 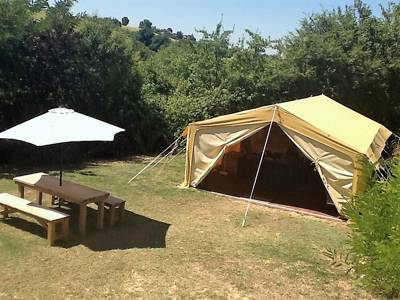 i
Our popular large two bedroom safari tents are set within secluded private hideaways overlooking the surrounding countryside. Each have a gas hob and refrigerator. Each Safari-tent comes complete with bed-linen comfortable duvets and pillows. Cooking and eating utensils are also provided. 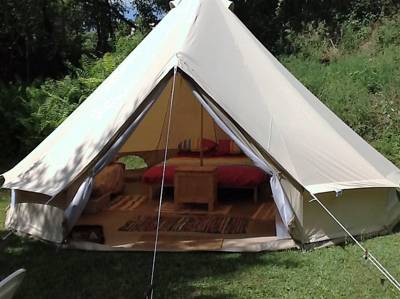 i
Our Glamping Tents at Country Camping are ideal if you want to experience all the rustic charm of camping, but with a touch of luxury.

Bell tent Sleeps 4 4 Available
Our Glamping Tents at Country Camping are ideal if you want to experience all the rustic charm of camping, but with a touch of luxury.
Select Dates or Read More 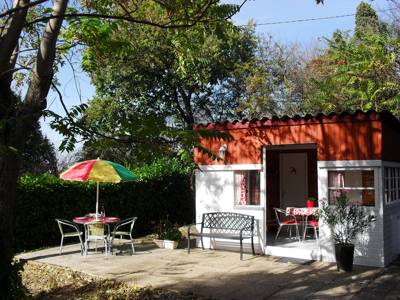 i
In this cute little wooden chalet, you will feel completely at home with all the home comforts, and its cute exterior and garden will make you feel like you're in your own little haven.

Cabin Sleeps 4
In this cute little wooden chalet, you will feel completely at home with all the home comforts, and its cute exterior and garden will make you feel like you're in your own little haven.
Select Dates or Read More
Show more
Check Availability

Country camping is located near the village Gaillac-Toulza which is situated in the Haute-Garonne (Midi-Pyrenees region) in the south of France 39 km from Toulouse, the department capital. It is approximately a 9–10 hour drive from Calais, a 4 hours’ drive from Bilbao Spain, 6 hours drive from Santander Spain. It is an hour and 15 minutes’ drive from Carcassonne airport and 45 minutes from Toulouse airport which are served by Easy Jet and Ryan Air. Major hire car companies are represented at these terminals. The nearest train station is in Saverdun (approx 10mins by car) and Auterive (approx 15 mins by car). The nearest transport link via bus is Saint Ybar (approx 20 mins walk). 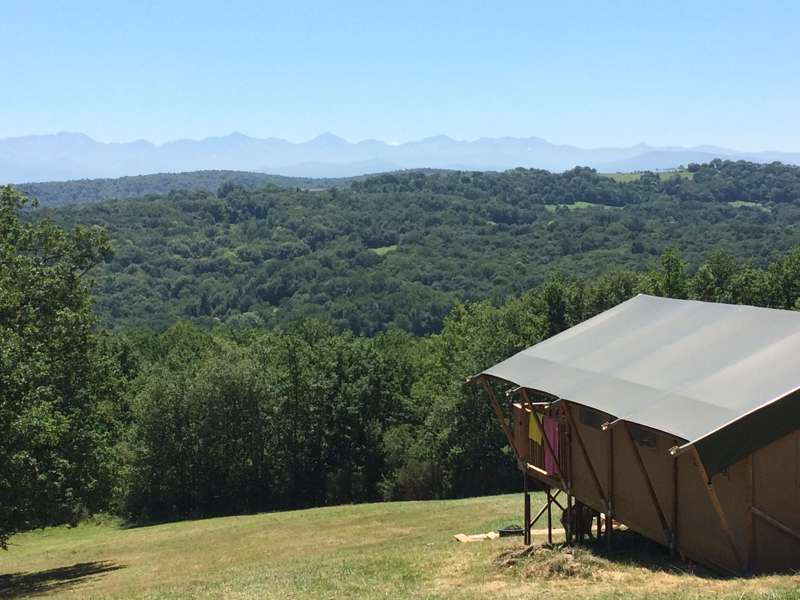