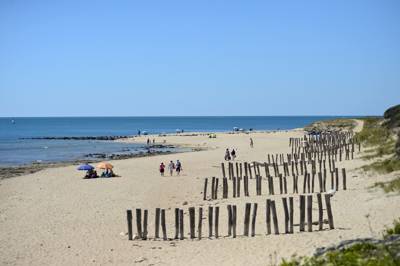 Though toll roads zip you speedily across France and a ginormous, two-mile long bridge takes you to Oléron, it’s good old fashioned bicycles that rule the roost on this sunny Atlantic isle. The total cycle network, spreading from the pine forest in Saint-Trojan-les-Bains right out to the Chassiron lighthouse on the northern tip, covers no fewer than 110 kilometers. Given the island itself is only 172 kilometres squared, that’s quite a feat.

No surprise then that Camping Les Chênes Verts is strewn with family bicycles. Even if you don’t bring your own there are extras you can hire, with the campsite boasting instant access onto the nearest trails. It’s all part of the ‘get active’ spirit of the place, home to a host of facilities to keep you occupied. There’s a playground, pétanque court, volleyball and table tennis. Beach-wise, it’s a mere 50 metres down to the waterside at Passe de l'Ecuissière, whose golden sands sweep north towards La Perroche and south as far as the eye can see. It's safe for paddling and increasingly popular for horse-riding too.

Sadly the campsite is not a family-run location. Owned by the Huttopia brand (who also have a second campsite on the island), the place is manned by staff and closes down through the winter. But with 100 pitches, it’s actually one of the smaller campsites on the island and keeps itself distant from holiday park commercialism. This is still camping as it should be. The wooded setting gives every pitch some privacy, with bumpy roots and worn, sandy pathways keeping the place natural and relatively untarnished, while tasteful safari tents are provided for glampers, rather than static mobile homes or nasty chalet buildings.

All in all, the campsite is one of the best on the island, with much owed to its combination of beachside location and shady wooded setting. If you do make it beyond the beach, there are tours of the fascinating saline harbour to be had, the medieval Château de Saint-Jean d’Angle to explore and the wooden fishermen's cabins, coloured houses and charming ports of the coast to discover. And if you don’t make it beyond the beach? Well, we wouldn’t blame you for that either.

It's a 50 metre stroll down to the beach. Bring a towel and while away some hours in the sun or walk north to where the sands curl into La Perroche in a crescent shaped bay. Island Kayak Oléron (07 82 517 217) offer the chance to get out on the water and explore the coast more thoroughly, or stay inland on bikes and tour some of the local attractions – the moated medieval castle in St Jean d'Angle (05 46 82 76 03), the saline harbour (05 46 75 82 28) in Le Grand Village Plage or the famous fishing village of La Cotinière, one of the oldest ports in the entire country.

The restaurant onsite serves excellent homemade pizzas, along with a host of other snacks and drinks best enjoyed out on the terrace. It's only open over the May public holidays and through July and August. Outside of those times there are still plenty of great eateries in the nearby harbour towns – the best spots to go for fresh seafood.

Camp by the ocean at Huttopia Oléron Les Chênes Verts amid sand dunes and holm oak forests.
At Huttopia Oléron Les Chênes Verts campsite, you can camp between the sea and the forest, just 50m from the beach! On the programme, exploring the island on foot or by bike, picnics at Ecuissière Pass, jogging on the beach… naturally authentic holidays.
Read More 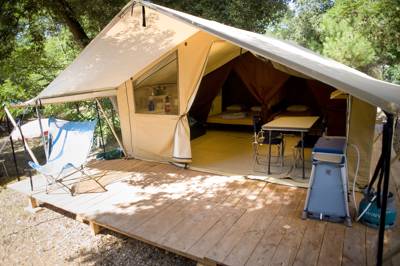 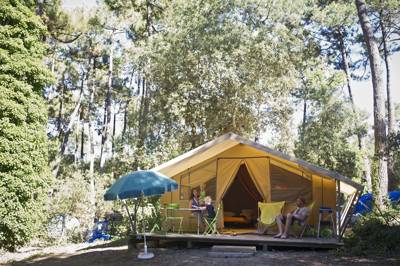 Safari tent Sleeps 5 2 Available
Large wood & canvas tent that can accommodate up to a family of 5. nestle perfectly with the natural surrounding environment. Stay by the sea and enjoy the fresh air and natural surrounding in comfort!
Select Dates or Read More
Show more
Check Availability