Canal-side camping with campfires, set in 30 acres of countryside and with an on-site tea rooms

Running from the edge of Derby to the River Mersey, the 93-mile Trent & Mersey Canal takes in the best of what the North Midlands has to offer, with stunning views over the Cheshire Plains. And though it’s those with narrow boaters that are best known for reaping the benefits, enjoying the tranquil waterway and wildlife, it’s a great place for cycling the towpath as well. Fortunately for landlubbers, the best-loved marina along the route has now set aside a space for camping too. And what a campsite it is.

Oakwood Marina boasts nearly a mile of canal frontage and space for up to 90 narrow boats, while the campsite, a vast green space with views of the marina, occupies nearly 30 acres of imperceptibly sloping land along the water's edge. The Wilder family, who own the place, have an attitude to the campsite that befits their surname. Grazed by cows in some parts and cut just once or twice a year for hay, the meadows are otherwise left long and wild in summer. A few footpaths have been conscientiously mown in between pitches to help guide you around the fields and over to another lake attached to the canal that’s a wildlife hotspot and a good place to watch for herons.

Toilet and shower facilities are available in the main marina building, where there’s also a small shop and a tearooms with picnic tables outside. But there are also additional toilets directly beside the camping area, along with washing up stations and additional drinking water taps. There are pre-pitched bell tents for glampers and campfires are very much allowed, with Dutch ovens available for hire and barbecue hampers you can purchase if you want to test your campfire cooking skills.

Walkers, cyclists and birders are perhaps most at home here. There are a couple of fantastic circular walks directly from the marina and a bike-friendly B road leads into Davenham and Northwich. It’s a 15-minute drive to the most famous landmark along the canal, an enormous boat lift known as ‘the Cathedral of the Canals’ that lifts narrow boats some 50-feet into the air. It’s 15 minutes, too, to the beautiful picnic spot at Pickmere, the woods of Delamere Forest and the stately grounds of Tatton Park.

Three toilets, two showers and coin-operated laundry facilities in the main Marina building, plus additional toilets adjacent to the camping area and a washing-up station with hot water. One of the toilets in the marina is suitable for disabled access and includes a baby-changing station and shower. Elson and rubbish disposal are provided, along with plenty of water taps, which are clearly marked around the site. There is no electricity in bell tents but there is a compostable toilet, hot water and washing up facilities in close proximity to the tents. The marina tearoom serves light meals, a selection of hot and cold and alcoholic drinks and has a small shop for basic supplies. Campfires are permitted in firepits only, raised well off the grass (bring your own or there are some available to rent on site, along with items like Dutch ovens you can use for campfire cooking).

A sofa pull out bed is provided in each tent for a maximum of two children to sleep on, this does not include bedding.

A great way to see the local scenery is by foot – try the popular three-mile loop along the towpath towards Middlewich, bringing you out past the local Farm shop, then back to the marina. In the other direction you can head towards the village of Rudheath and part way to Northwich. If you’re planning on bringing your bikes, the road adjacent to the side of the site is a national cycle route and becomes very popular amongst cycle clubs in the summer months. Anderton Boat lift is an interesting piece of engineering that can be accessed via a long walk down the tow path but it’s probably better to take a short journey across town in the car (around 15 minutes or so). The Lion Salt Works Museum (01606 275066) is also just around the corner, less than 10 minutes' drive away, and is a great option for learning more about the history of the area. A number of country parks are in close proximity, Marbury Park (01606 77741) being the largest and around 15 minutes away. Stately Tatton Park (01625 374400) in Knutsford or Dunham Massey near Altrincham are both around 15 minutes away by car too. For a bit more bustle, shops and city life, Liverpool, Manchester and more diminutive but attractive and historic Chester are all around 45 minutes from the campsite.

Campsite owner Michael recommends the local Italian in Davenham, five minutes by the car. Between their cocktail menu and fresh traditional dishes, it’s obvious why Turturici (01606 331155) often pops up at the Restaurant of The Year awards. Cheshire Bar & Grill (01606 41100) is a good bet for meat eaters (a 25-minute drive), while the closest option is The Broken Cross pub (01606 333111) in Rudheath. To build up an appetite you can access the pub along the canal tow path (a 20-minute walk). There's a handful of takeaways in Davenham, while Northwich is the nearest spot for larger supermarkets.

Oakwood Marina is a family run business in the heart of Cheshire,  The home of Oakwood Glamping & Camping. Our site, set in 30 acres of undulating open countryside, has a private 1km canal frontage & a host to a whole array of wildlife, our favourite being the resident Barn Owls. The 5 Luxury Bell tents are situated overlooking the tranquil marina, spaciously set out and furnished to create a homely feel. Site facilities include hot showers, toilet (incl disabled), Elson, coin operated laundry & a tearoom which is open 5 days a week.

Located right on the water’s edge the tearoom offers a perfect spot to enjoy one of our finest coffees while watching the boats go by!  Dog’s are welcome but must be kept on a lead, wildlife has priority particularly when nesting and the owls are low flying for food.

20 pitches, five of them suitable for campervans, and a five glamping bell tents. 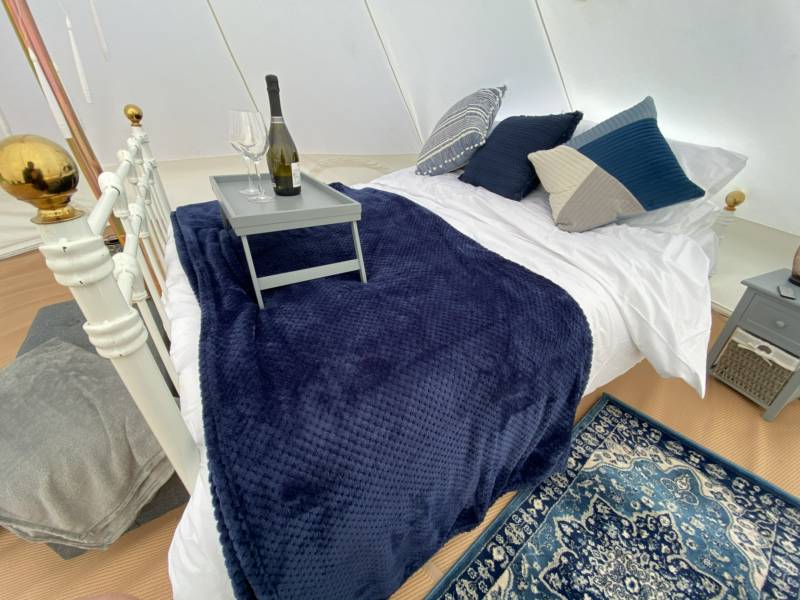 From the south, leave at junction 18 of the M6. Head towards Middlewich and then Northwich along the A530 until the crossroads after Stornengy (turning left there towards Davenham). The site is on the left, just before the canal.

From the West, head through/around Northwich getting onto the A556. At Morrison’s roundabout take the A530 towards Middlewich. Go over the small roundabout to Morrison’s Warehouse and then turn right at the cross roads towards Davenham. The site is on the left, just before the canal.

The nearest station is in Northwich on the Manchester/Chester line and at Hartford on the West Coast Main Line. The nearest bus stop is in nearby Rudheath (over a mile away).