When Otis Redding was sitting on the dock of the bay, wasting time and watching the ships roll in, it's not likely that he had booked himself into a campsite for the night to do so. But that’s (almost) exactly what’s on offer at Nelson’s Wharf, a peaceful family-owned holiday retreat in the Warwickshire countryside. Just like Otis, you can sit in the morning sun, if there is any, and you can sit when the evening comes, and you can do it on the deck-ing of your very own luxury glamping pod on the banks of the Grand Union Canal. Okay, so there’s no rolling tide, and the ships are more like boats, but the idea remains the same: time disappears and doing nothing is perfectly acceptable.

Located midway between the towns of Rugby and Royal Leamington Spa, the wharf is part of a 40-acre estate which up until the 1940s was the site of an industrial cement works. Looking at it now, you wouldn’t be able to tell; the whole place has reverted back to luscious green pastures and has recently been designated a Site of Special Scientific Interest. And, not satisfied with bringing back the wildlife, made evident by butterfly and wildflower conservation efforts, the owners now want to share the newly created haven with the wider public. To that end, they’ve put three kitted-out pods along the edge of the waterway.

The structures, beautiful timber scandi-huts, sit side-by-side in a peaceful field at the eastern edge of the privately owned land, looking out across open fields to the south and the passing boats of the canal just a few metres to the north. Each pod will easily accommodate a family of four, but there is enough space to pitch extra tents as well. What you get is essentially a decent hotel room with an outdoor feel; heating, soft mattresses, kitchen, shower, and toilet. There’s also a TV and WiFi if the passing boats aren't enough to appease you — make sure you do remember to wave at the boats as they slowly go by, it’s the customary etiquette of the high (and low) seas.

The campsite is within easy reach of historic Warwick and Shakespeare’s Stratford-upon-Avon for cultural days out, but nearby sees some nice walking routes which offer the chance to take in some of the local scenery. One of the 44 Millennium Way walks can be joined from Nelson’s Wharf, which will not only take you into the outlying countryside but also past a seemingly endless number of pubs along the five-mile route. And if you want to get even closer to the water, then Stockton reservoir is just over a mile away and has good carp fishing.

Every pod has heating, a double bed, sofa bed for children, a private shower room with toilet and basin, kitchen unit including twin hob and microwave along with free wi-fi and TV. Outside the pod is a decking area with picnic table, fire pit for outside heating and cooking plus disposable barbeque stand.

Up to two tents per pod booking are allowed to accommodate children. Caravans and campervans by arrangement. Sorry but we cannot accept dogs.

There is plenty of choice for local dining including pubs like The Boat Inn Restaurant and Bar which is 10 minutes walk across the Rugby Road from Nelson's Wharf, Kings Head Napton, The Folly Napton, Crown Inn Stockton, Blue Lias Long Itchington, Dun Cow Dunchurch and others in Southam. The nearest takeaway is Rice and Spice Chinese in Stockton 15 minutes walk away with more takeaways in Southam and Dunchurch.

Nelson's Wharf is a small unspoilt family owned holiday site with just three high specification camping pods plus room for family camping as an accompaniment the pod booking. This is perfect for the family where the adults can enjoy the luxury of a pod along with two youngsters or the youngsters can enjoy safe, adjacent camping outside. Caravans and campervans are welcome by arrangement. Read More

Three luxury glamping pods with extra tent camping (maximum of two per pod) on request. Campervans and caravans are allowed on request. i
Apple is just one of three high specification Pods on the site with views of the Grand Union Canal and open fields.

Pod Sleeps 4
Apple is just one of three high specification Pods on the site with views of the Grand Union Canal and open fields.
Select Dates or Read More i
Blackberry is just one of three high specification Pods on the site with views of the Grand Union Canal and open fields.

Pod Sleeps 4
Blackberry is just one of three high specification Pods on the site with views of the Grand Union Canal and open fields.
Select Dates or Read More i
Cherry is just one of three high specification Pods on the site with views of the Grand Union Canal and open fields.

Pod Sleeps 4
Cherry is just one of three high specification Pods on the site with views of the Grand Union Canal and open fields.
Select Dates or Read More
Show more
Check Availability 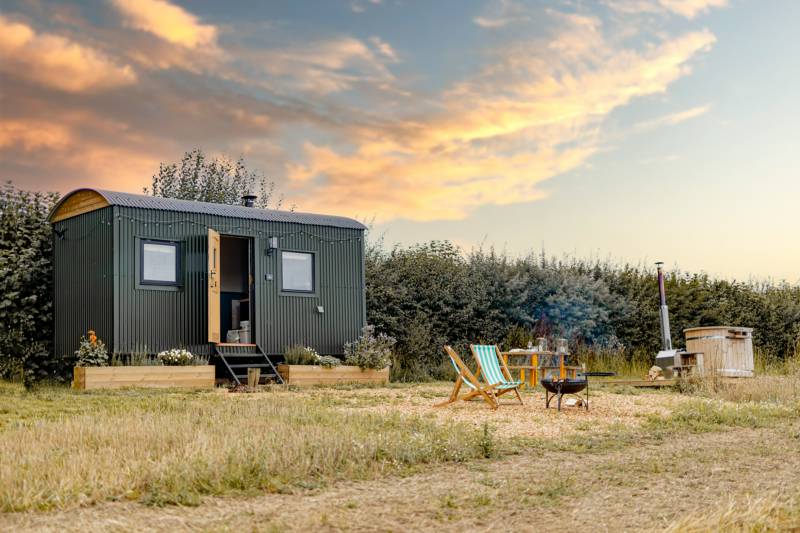