Book with confidence at Greenhill Glamping with our Coronavirus Booking Guarantee 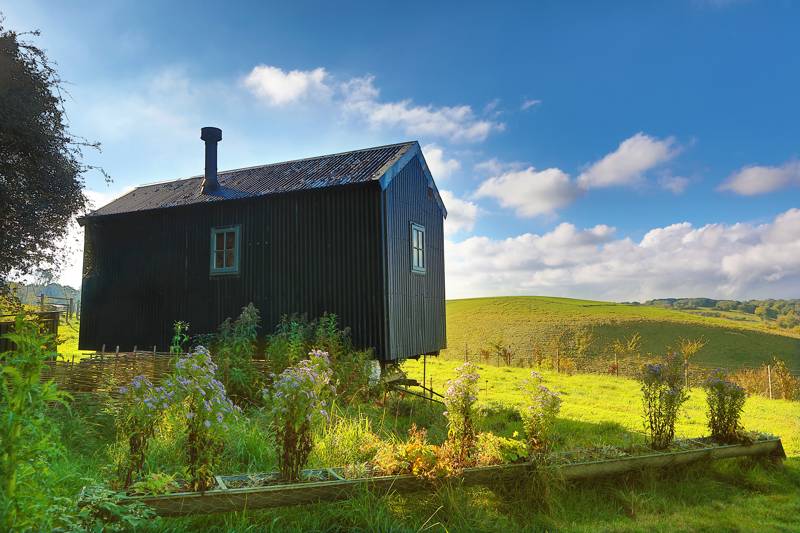 Impeccably restored huts from the late 19th-century, kitted out for couples with king-sized beds, wood-burning stoves and views over the Kent Downs

Wendy and Neil Burrows have a passion for Greenhill Glamping that is contagious and once you arrive here it is easy to see why. In the south eastern stretches of the Kent Downs, two miles from the south coast, the countryside is full of history and on every countryside stroll you seem to stumble across some relic of the past. It’s a five-mile walk to Dover Castle, three miles to the Battle of Britain Museum and a mile to the local, 12th-century church. It seems no surprise, then, that Neil and Wendy’s glamping enterprise is about far more than just offering comfortable outdoor accommodation. Staying here is also about living amongst history. This is a restoration project and, in short, a truly one-of-a-kind glamping experience.

It started with a shepherd’s hut, discovered half sunken in Romney Marshes where it had been abandoned for over 75 years and originally built by steam engine manufacturers Marshalls of Gainsborough. Wendy and Neil bought it in 2016 and set about painstakingly restoring the shell and woodwork. At the same time, however, they breathed new life into the interior, with modern day functionality such as electricity, running water and en-suite bathroom facilities. The finish is both modern – Edison-style lightbulbs cast a warm glow above a fitted king-sized bed – yet thoughtful. The names of World War II anti-aircraft gunners who sheltered in the hut during cold nights are still etched into the walls.

Within a year of opening to glampers, the shepherd’s hut was earning rave reviews. And, thanks in part to Wendy and Neil’s impeccable hospitality, was featured in The Telegraph as one of the best new (or is that old?) places to stay in Kent. So, when another dilapidated living wagon came up for sale – previously used by group ploughman who would tow their wares from farm to farm – the couple once again set about their craft of restoration. The origins of the Ploughman’s Retreat are more mysterious – it was likely built by steam engineers Clayton & Shuttleworth – but, just as before, Neil and Wendy have strived to keep as much of the original structure in place. A wood-burning stove, en-suite shower room and modern kitchen provide the mod-cons glampers would wish for, but the sense of warmth and comfort within comes as much from the wooden finish and sense of history as it does from the king-sized bed. And don’t expect WiFi; this is still a countryside retreat.

While the two historic structures each enjoy a private location on the farm, both enjoy views of the Alkham Valley and a similar situation within walking distance of the village. There’s a decent pub, the old church and a riding stables, the latter just a few yards up the road, while numerous footpaths take you straight out into the surrounding downs. It’s a 10-minute drive to Dover Castle and the white cliffs just beyond, and 25 minutes to Canterbury. And, if all that history is just too much, it’s 10 minutes to the beach.

Book with complete confidence at Greenhill Glamping with the Glampingly Coronavirus Booking Guarantee. We guarantee the following clear policy for your booking:

Each of the huts at Greenhill Glamping is completely unique but both feature a kingsize bed (all bedding provided), antique table and chairs, wood-burning stove (with ample wood stored undercover) and a large ensuite bathroom with a shower, basin, and flushing toilet, plus towels and toiletries provided. There is an electric 2 ring hob, fridge, mini butler sink, china, cutlery, pans, BBQ tools, toaster, kettle and Nespresso coffee machine. Outside table and chairs, a wood store and outdoor firepit with BBQ grill are also provided. A welcome tray awaits your arrival. The farm is part of a national environmental stewardship scheme, so expect plenty of wildlife, and it's a short walk down to the stables to see the ponies.

Each hut is suitable for 2 adults only. One dog is permitted in each hut at  anextra charge of £20.00 per stay.

Greenhill Glamping is in the heart of the Alkham Valley with its network of footpaths and bridleways. Horse riding at the Alkham Valley Community Project (07472910009) is a 15-minute walk away, while Port Lympne Safari Park (01303 264647) is a 10 minutes drive and also has great views across Romney Marsh. Walk the white cliffs after a visit to nearby Dover Castle (01304 211067) or explore the Folkstone seafront. This stretch of UK coast has seen more battles, skirmishes and occupations than anywhere else in the UK and has a bucket load of castles and abbeys to show for it. A day exploring the streets of Canterbury isn't a bad place to start for history – pop into the cathedral (01227 762862), nose around the castle (01227 378100) and, if the weather's good, rent a punt (07786 332666) for an hour on the water.

You can order generously sized breakfast hampers (£15 for 2 people) with local and homemade produce delivered to the hut in the evening. Wendy can also provide excellent packed lunches if you decide to stay local (£7.50 per person). Canterbury Farmers Market runs 6 days a week in the city centre and there's also great farm shop (01304 212040) in Farthingloe. On weekends, the Folkestone Harbour Arm opens up with pop-up restaurants and live music. It's seasonal but, when running, highly recommended.

A beautifully restored 19th century shepherd's wagon located on the Kent Downs in the beautiful Alkham Valley, near to Dover. The perfect retreat for 2 looking for a special luxury stay. Kingsize bed overlooking stunning views and ensuite with large shower. Woodstove for those cosy evenings tucked up inside! Outside fire pit and barbeque to enjoy sunsets across the valley. Our shepherd's wagon is situated within its own private paddock with private parking. Read More 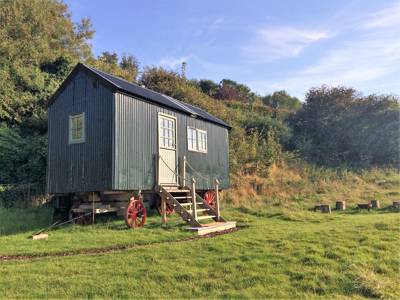 i
Beautifully restored, original, 19th-century shepherds hut in the peaceful Kent countryside, featuring an en-suite bathroom, a log burner, an outdoor fire pit and private paddock. (with views across the Kent Downs). 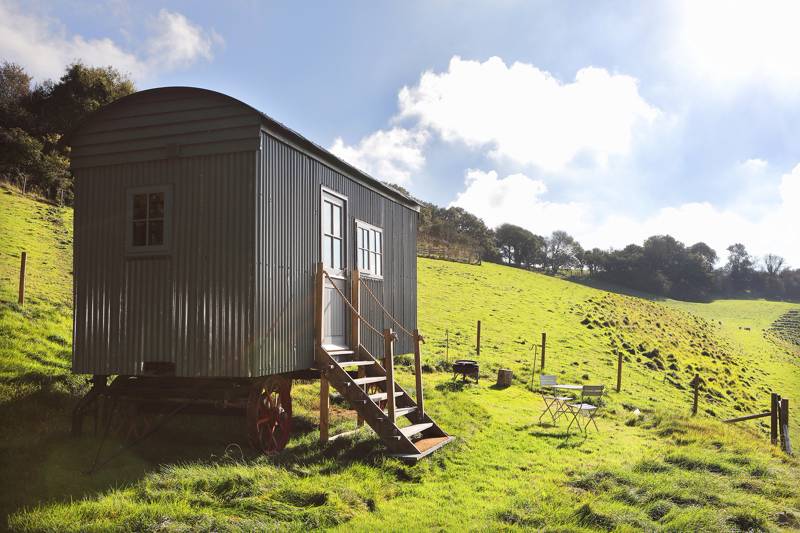 i
A beautifully restored, original, early-20th-century living wagon, once used by ploughmen travelling from farm to farm and now equipped with an en-suite shower room, toasty log burner and luxurious king-sized bed.

From the ferry: On leaving the Port of Dover follow signs to London M20. After the last roundabout continue along the A20 (M20) towards London, then take the 2nd exit (signed Canterbury/ Folkestone to A260) and at the roundabout follow signs to Alkham. After 2 miles Meggett Lane is 2nd on the right and Alkham Court is on the right just before the top of the hill.

From the M20, follow signs towards Dover past Junction 13 where the M20 joins the A20. Drive through the tunnels and then immediate exit direction A260 Canterbury/Folkestone. Turn left at roundabout, back over the motorway, then turn left again following signs to Alkham.  Proceed down the Alkham Valley road for approximately 2 miles, turn right into Meggett Lane and Alkham Court is on the right just before the top of the hill.

From the M2/A2, follow signs for Dover. When you reach a roundabout with McDonald’s on your left, take the 4th exit (Dover North/ River and Temple Ewell).  At the next roundabout take 2nd exit (River, Temple Ewell) then after 100 metres turn left to Alkham. Go through the village of Alkham then turn left after the garden centre into Meggett Lane and Alkham Court is on the right before the top of the hill.
Trains from London Charing Cross – Folkestone Central are every 30 minutes at peak times and, with the high speed train from St Pancras International Station to Folkestone Central, journey times are now only 55 minutes. At Folkestone Central Station there is a taxi rank just outside the main entrance or a short walk towards Kingsnorth Garden where there is also another taxi rank.

A little gem in wonderful surroundings.

We, my daughter and I, stayed for two nights in this beautifully fitted out Shepherds hut. Surrounded by gently sloping hills this Shepherds hut has everything you could possibly need to enjoy a peaceful and relaxing few days away from your normal hectic lifestyle. The king size bed was comfortable but caused some nightly giggles as it is quite high for someone like me, a little height challenged. The shower was amazing, both roomy and powerful with plenty of hot water. We opted for the breakfast hamper as well, which was delivered the evening before and had lots of goodies to start our days. Novices to lighting fires we managed not only to make a fire in the fire pit but to also cook our dinner both nights on it. As the weather was good we did not need the fire in the hut but should imagine that on a cooler or winter evening the fire would make the hut very cosy. There isn’t anything that I can say that was needed or would enhance your experience at this shepherds hut and Wendy is a good host. Will definitely rebook for a few more dats of rest, relaxation and quietness.
Show more 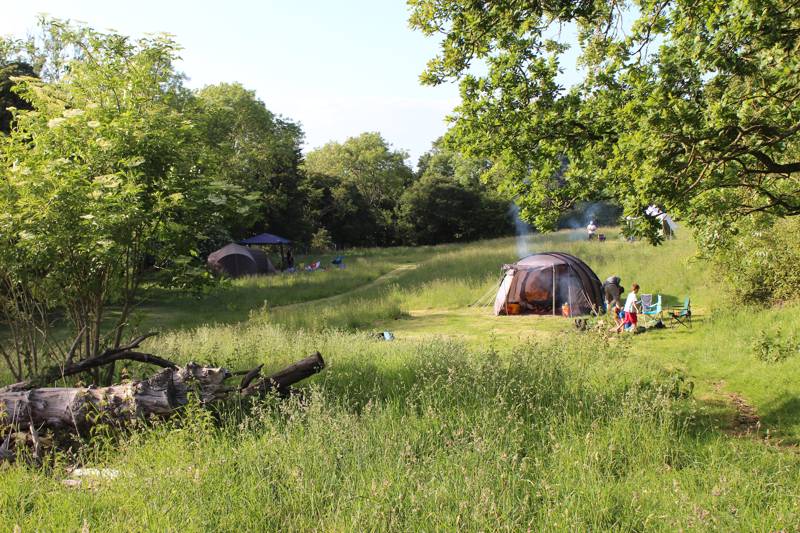 Ashford, Kent, South East England
Maxted Street, Nr Stelling Minnis, Canterbury, Kent CT4 6DJ
A convivial rural campsite with 15 pitches in a hilltop grassy meadow in the Garden of England. Play in the wildflowers, cook atop your campfire, or just plain chill.
A convivial weekend-only campsite set across two hilltop meadows in the Garden of England, with campfires permitted and glamping options too.