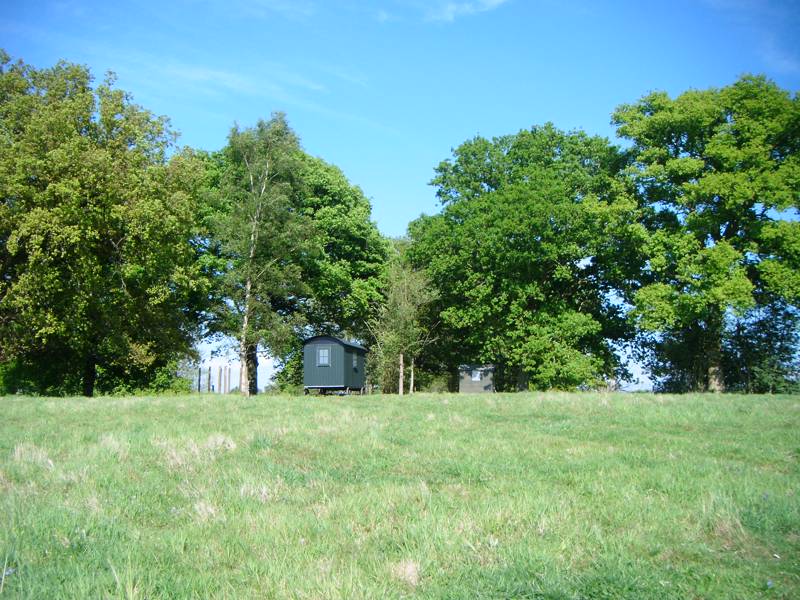 A single, traditional shepherd's hut with countryside views, and a cosy feel
The squawk of a car horn, the flash of a camera, the constant shuffle of pedestrians bustling on the busy streets – the frenetic energy of London is never easy to escape. And when you do decide to head for the countryside, it’s always important to find a removed, secluded slice of the natural landscape. Less than 30 minutes from the M25, Lockhurst Hatch Farm is a site that manages to create such an 'away-from-it-all' atmosphere, despite being an easy journey from all the action. Here the fumbling of tent pegs and clipping together of poles are replaced by the pre-arranged comforts of a traditional shepherd’s hut, where privacy is guaranteed as guests are sole occupants of this cosy hill-top abode.

Hand built by craftsmen in Dorset using oak, spruce and Douglas fir, Lockhurst's charming dark green hut has been built with tradition in mind, based on the proportions of a Victorian shepherd’s hut. Despite harking back to these shepherding days, the hut's history still pales in comparison to the farm itself which dates a good 200 years further. Beautifully timbered, Lockhurst Hatch Farmhouse is as quaint as they come and though now operating as a B&B, it is still the centre point of the 30 acre farm where Portland and Jacob sheep graze and chickens scratch around.

Inside the hut, space is carefully managed with a sofa that folds out into a double bed topped by a deep, memory foam mattress. Table and chairs are provided and allow somewhere to relax while you stoke the wood-burning stove, complete with a healthy stack of logs. Outside, to one side of the hut, a small pine cabin houses a composting toilet, while, on the other side, a shower is found. Gas-powered, this outdoor ablution makes the most of the stunning views the site affords its guests. A bark screen is pulled across to protect your modesty, but beyond you can gaze across the Surrey Hills, an Area of Outstanding Natural Beauty, with its verdant rolling hummocks stretching into the distance.

Making the most of this landscape does not involving travelling far. Welcoming owners, Gill and Pete (the same people that provide your daily breakfast hamper), are quick to suggest a host of excellent cycle routes and footpaths. Happy to lend a map, they can point you offsite where paths and bridleways lead directly into the woods and out into the open heathland. Wander through Winterfold Forest (abuzz with wildlife), or take a bike for the rolling ride to the village of Shere, a beautifully untainted village complete with two pubs, a tiny museum and ducks dabbling in the ford. If you return after dark then remember to bring a torch, it’s a short wander up to the top corner of the field, where the quiet privacy of your Surrey Hills hideaway awaits.

Set on top of a hill, the shepherd's hut has stunning all-round views across the Surrey Hills. Inside there is a double bed, table and chairs and a wood-burning stove. Photovoltaic power supplies the lighting, plus there are two 12V sockets which can be used for re-charging mobile phones. There is a compost toilet and gas-powered outdoor shower nearby. Lockhurst Hatch Farm comprises 30 acres of pasture and woodland set in its own valley. The farm keeps sheep along with assorted hens and is located down a quiet country lane, surrounded by fields, forest and heathland. There is a direct bridleway and footpath access to the forest and heath, great for outdoor activities such as walking, cycling and riding.

Glamping only. The shepherd's hut sleeps two people in a double bed.

Ramblers can pick up the North Downs Way for some splendid walking, while cyclists can take on the challenging Surrey Hills. Down a gap carved by the River Wey, amongst the slopes lies Guildford (8 miles) with its enormous cathedral (01483 547860), a Norman Castle (01483 444751) and a pleasant high street. On the way, a detour into Shere is well worth your time, a picture-perfect place to stop for a drink in one of its numerous charming pubs. To the west Compton plays host to the Watts Gallery (01483 810235), a remarkable space for the works of prolific Victorian painter and sculptor George Frederic Watts. Those on the hunt for history and culture will enjoy the National Trust properties Polesdon Lacey (01372 452048) and Clandon Park (01483 222482), while privately owned Busbridge Lakes (01483 421955) matches both in size, history and grandeur.

Gill and Peter deliver a delicious farmhouse breakfast  to your doorstep in the morning, at a time of your choosing. Breakfast can be chosen from the menu which includes, cheeses, cold meats, home-made bread, yoghurt, granola and more. There is often enough left for your lunch if you are walking or cycling and want to take some with you. Those eating out should head north to the villages of Shere and Gomshall, a couple of miles away. Gomshall Mill (01483 203060) is a timber-framed mill dating from Medieval times, and inside this characterful space good food is served at reasonable prices. Similarly atmospheric is the 1920′s Hurtwood Inn, with a contemporary bar serving traditional ales. For finer dining, Kinghams (01483 202168) restaurant was opened in 1993 by chef proprietor Paul Baker and now features in all major guides – booking is therefore essential. Other local favourites that have to be mentioned are the recently renovated William Bray (01483 202044), 15th century timber framed The White Horse (01483 202518), which has featured in several films, and the wonderfully local William IV (01483 202685), with low chunky beams and roaring log fires in winter. 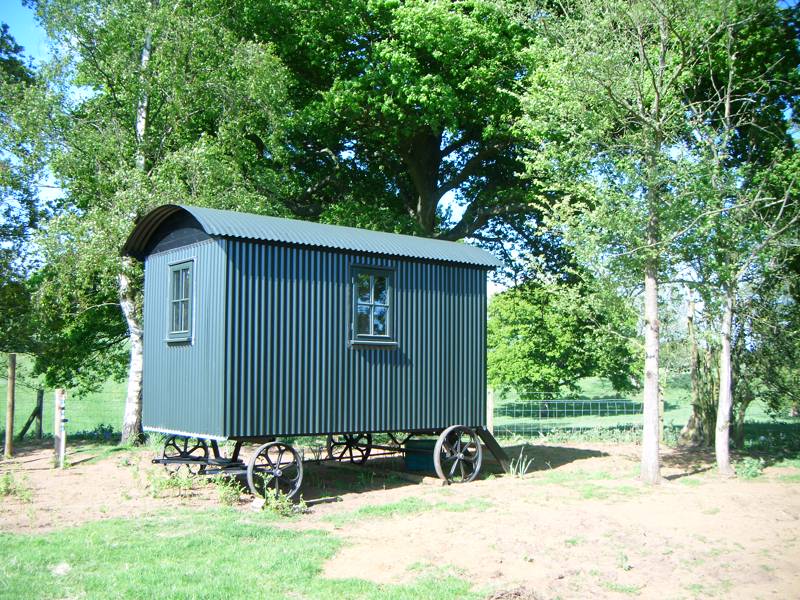 i
A Shepherd's Hut set on top of a hill in one of our fields with stunning all-round views across the Surrey Hills. The hut is made to an original design by Plankbridge, Dorset (suppliers to the National Trust and HRH Prince Charles).

Shepherd’s hut Sleeps 2
A Shepherd's Hut set on top of a hill in one of our fields with stunning all-round views across the Surrey Hills. The hut is made to an original design by Plankbridge, Dorset (suppliers to the National Trust and HRH Prince Charles).
Select Dates or Read More
Show more
Check Availability