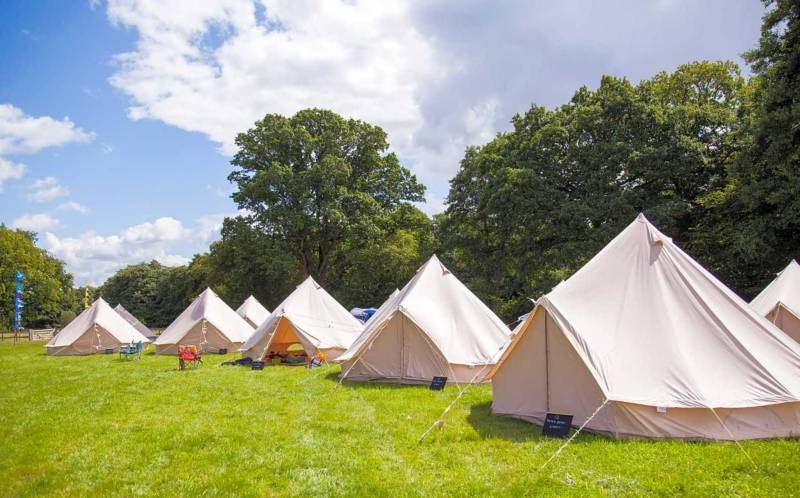 After the global pandemic is over, 2020 and 2021 might just become known as 'the years of the staycation'. And, with big weddings cancelled, festivals abandoned and large events postponed, there’s a wave of temporary glamping sites popping up instead, as businesses put their bell tents to good use and help us all find last-minute places to stay in summer.

Dreamfield Glamping, near the South Devon coast, though, has the feel of a place that was always meant to be. Yes, it’s a one-off and is only open for a few weeks in summer, but with hot gas-powered showers and with the beaches of South Devon within striking distance, it feels as though this is a ‘proper’ established glamping site that’s been thriving here for years. Indeed, it’s a shame it won’t be around further into the future. Here's hoping it will.

For this year, at least, they are setting up their 31 bell tents on an organic farm high on a Devonshire clifftop. The location and the layout affords each tent a safe sea view. You’re a couple of fields, a footpath and a number of fences away from the cliff edge but that can’t detract from the scene that awaits every morning when you unzip the tent to receive your campsite breakfast. This is glamping for glampers; beds are made, electricity provided and breakfast is served. Over at the bar; campfires are lit, films are screened and drinks are poured.

It’s not just the hospitality that makes this place dreamy, it’s also its south coast location. Aside from the view, the space, sights and sounds of the surrounding farm; there’s the beach. The closest is a mere ten-minute walk away on the South West Coast Path (which, by the way, runs close by the site) but, for a nicer spot, we’d suggest you go further. Three miles east is elegant Sidmouth and the same distance west is charming Budleigh Salterton; both a lovely walk if your legs are long enough and a very short drive if they’re not. Hire paddleboards, eat Devonshire ice cream and then make your way back to Dreamfields for a G&T at sunset. Campfires are lit, films are screened, drinks are poured and memories are made.

Inside each five-metre bell tent you will find a double bed with a proper mattress along with air beds for additional guests, rugs, throws, hay bales, firepits, handmade bunting, warm lanterns and fresh flowers. There is a picnic table for alfresco dining outside each tent. A delicious locally sourced fresh Breakfast is served at your chosen time right to your tent, wake up to the sun rising over the sea. Our communal area offers hay bales and plentiful seating, a bar, outdoor cinema, barista coffee machine and a firepit, perfect for toasting marshmallows under the setting sun. Please still remember to practice social distancing in these communal spaces.

Dreamfields is a secret hideaway where you can reconnect with loved ones around the campfire, drink hot chocolates under the stars and fall asleep to the sound of the waves below. An idyllic location for special occasions, rejuvenating retreats, birthday celebrations, family get-togethers or just a unique venue for groups of friends to reconnect in the great outdoors. Dreamfields is the perfect Glamping location for families and friends, groups of all ages.

With beautiful countryside & miles of stunning coastline Dreamfields is the perfect staycation destination this Summer. A network of footpaths links us to the South West Coast Path so there are no end of walks to enjoy leading to nearby villages, beaches & towns..

It’s hard to find a village more postcard perfect than Otterton, with thatched cottages & traditional farmhouses it’s a rural retreat from the hustle & bustle of everyday life. Stroll through the narrow streets enjoying village life, explore the surrounding hills & countryside or enjoy a picnic on the banks of the River Otter. The village centre is a 10-minute walk away

Set back in a secluded bay, the beach at Ladram Bay Beach is a perfect location for families with rockpools, safe swimming & boats for hire it’s a great place for everyone. The beach is a mile away, a 15 minute walk along the coast path

A beautiful coastal town with a regency feel, Sidmouth offers a little something for everyone. Sidmouth is home to a beautiful beach which offers water sport facilities &. rockpools galore at low tide. Explore the heights of Jacobs ladder, enjoy a cream tea in one of the towns charming cafes. Sidmouth is a 4 mile drive away or a 3 mile walk which takes in beautiful scenery but has the challenge of climbing ‘Peak Hill’ as part of the route.

Budleigh Salterton is a charming, picturesque & friendly town with a relaxed atmosphere. With a two-mile pebble beach, it’s the perfect spot for a refreshing dip in the stunning clear waters of the sea or some fun in the water playing at the river mouth as the river otter joins the shore line. The streets are packed with a variety of independent shops, luxury ice-cream parlours, quality cafes & a nationally renowned fish & chip shops ensures it’s the perfect location to enjoy. Budleigh is a 3 mile drive to the town or a 2.5 mile walk along the coastal path & then following the river otter as it joins the sea.

There are a choice of beaches within a few miles of site. The closest is Ladram Bay Beach, just a mile and a walk of about 15 minutes on the coast path away. It’s great for swimming and rockpooling and there are boats for hire too – but it can be busy as there’s a caravan park in prime position behind it. A little further, a four-mile drive or a three-mile walk, is another beach at Sidmouth, an elegant Victorian town with plenty of facilities including watersports, shops and places to eat and drink. In the other direction (south west) it’s about three miles to Budleigh Salterton, a charming town with a two-mile pebble beach where the River Otter meets the sea and a further five miles to Exmouth.

Imagine sharing an unspoilt and intimate fourteen-acre field in rural Devon with all your favourite people. Waking up as the sun is rising over the sea to the east, and finishing your day with a beautiful sunset to the south-west, with nothing but miles and miles of unspoilt panormaic views in between.

After such a successful first year gathering rave reviews in rural Somerset, Dreamfields are excited to return for 2021 - bringing our luxurious glamping vibe to a beautiful spot on the South Devon Coast.

South Devon is often called the English Riviera due to its microclimate of sheltered coastline, low rainfall and long sunny days and the new Dreamfields site is a wonderful base for exploring the Jurassic Coastline.

Explore the local beaches and play in the surf, discover the nearby rockpools and sandy bays or take your time to simply enjoy the expanse of unspoilt countryside.

Our pop-up, luxury glamping venue is set within the stunning grounds of Stantyway, a working organic farm on the outskirts of the quaint village of Otterton and nestled on the cliffs between the stunning coastal towns of Budleigh Salterton and Sidmouth. It is a haven for nature and an area of outstanding beauty and you will find fields of beautiful lupins, dozens of wild hares and peregrine falcons nesting in the cliffs.

Built with social distancing in mind, every aspect of our location has been developed to ensure you can holiday safely and securely this summerImagine spending the days breathing in the fresh air as you explore the Devon beaches, delve into the local rockpools or take an excursion on a boat to discover the shoreline. Or head inland and lose yourself in the beautiful countryside listening to the birdsong in the woods nearby.

Imagine spending the night in your luxury bell tent after an evening under the stars, surrounded by glowing lanterns and the cosy warmth of a fire pit.

Our luxury glamping experience is a slice of indulgence in the wild countryside yet less than four hours from Central London. i
A secret, luxurious hideaway, with nothing between you and the wide expanse of the ocean. Hidden in the beautiful Devon countryside.

Bell tent Sleeps 5 40 Available
A secret, luxurious hideaway, with nothing between you and the wide expanse of the ocean. Hidden in the beautiful Devon countryside.
Select Dates or Read More
Show more
Check Availability

From the main road through the pretty village of Otterton (Fore Street) take Bell Road, signposted towards Ladram Bay. After about 100 metres, turn right on to the narrow Stantway Road. Dreamfields is located on Stantyway Farm after another half a mile.

The closest railway station is at Exmouth (eight miles away). From there you can take a taxi or get the bus towards Sidmouth which stops in Otterton, a mile from site. If you’re walking on the South West Coast Path, the site is 50 metres off the footpath midway between Budleigh Salterton and Sidmouth, south west of Ladram Bay. 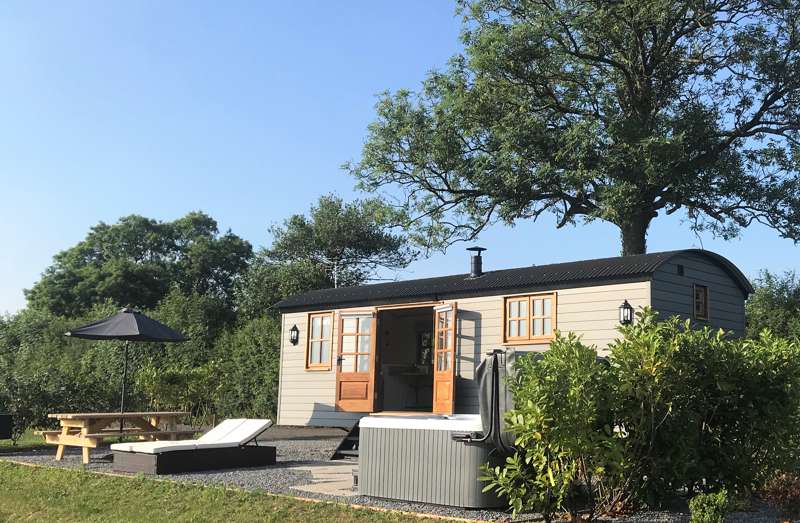 A pair of super-luxury shepherd's huts in the rural Culm Valley countryside, where good walks and welcoming pubs abound 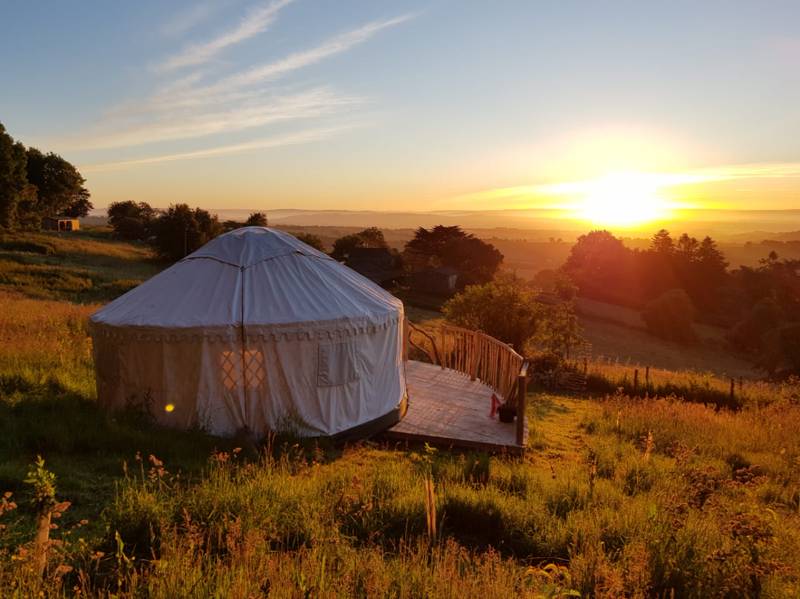