There must be something in the water at Greener Glamping. Almost everyone who comes here feels so rejuvenated that they ask to stay an extra night. In fact, it was happening so often that Nathan and Shayne, who run the site, brought in a three-night booking minimum. It’s just enough time to relax into the rhythm of life at this out-of-the way site in the Welsh Berwyn Mountains.

This two-yurt glamping site is a kilometre from the nearest neighbours and completely off grid. These days that’s not an uncommon claim but, here at Greener Glamping, it’s especially true as Nathan and Shayne aren’t just providing this lifestyle for their glampers; they are living it too. Any power that’s used is generated renewably and water is fresh from a mountain spring. Despite our claims, there’s actually nothing in the water. Well, nothing but the good stuff anyway. It's as pure before the filtering required by the authorities as it is afterwards. There’s certainly no need to bring a bottle of Evian and, actually, little need for anything else either.

The yurts, one sleeping four, the other up to seven, are kitted out with beds, bedding and log burners. Outside, each has a fire pit and space for outdoor cooking as well as an equipped kitchen cabin, its own composting loo and shower. All you need to bring is food and anything you want by way of entertainment. Forget the iPad and bring a book. Leave the stereo and pick up your guitar. It’s that sort of place. Somewhere to calm down, slow down and perhaps stay an extra day.

The site is surprisingly tiny, just half a hilly acre but with only two yurts and miles of surrounding countryside and forest it feels completely uncrowded. Step off site and you’re into the wild, with miles of woodland and moors to explore. It’s possible to walk for hours and not meet anyone at all but, if it’s civilisation you’re after, there’s a pub and a shop a mile down the hill. For climbing, cycling and adventure, Snowdonia National Park is 20 minutes’ drive away. South, across the sparsely-populated, heather-clad Berwyn Mountains, is Pistyll Rhaeadr waterfall, Wales’ highest single-drop fall and, legend has it, the gateway to the Celtic Otherworld. Mysterious standing stones, stories of fairies and giants and spiritual significance are all linked to this part of north Wales. No matter what you believe, there’s no denying that the abundant greenery, wildlife and stars mean there’s a kind of magic in the fresh mountain air. Perhaps, even, in the water.

Each yurt has beds, bedding, comfy seating and a log-burning stove. They each have a covered porch area with outdoor seating, and a fire pit/BBQ for cooking on. A bucket of logs and kindling suitable for the stove/firepit will be provided and more can be purchased or collected. Each yurt has its own separate cabin where there's a kitchenette, with a fridge, gas hob, cookware, tableware and utensils. There's also a compost loo and a shower per cabin.

Greener Glamping is deep in Cynwyd Forest, in the Berwyn Mountains and above the Dee Valley Area of Outstanding Natural Beauty in North Wales. Snowdonia National Park is just 20 minutes away. Between the two, there's all the outdoor activity you could wish for: walking, cycling, climbing, white-water rafting, archery, gorge walking, zip lines, underground trampolines... the list goes on. The site sits on the North Berwyn Way walking route and Pistyll Rhaeadr, Wales' highest waterfall and a place of great significance in Celtic legend, is just over 10 miles south.

It's a mile down the hill to the closest pub, The Blue Lion (01490 413656) in Cynwyd. The village also has a little shop which sells any basics you might need. For more than that, try Rhug Organic Farm shop, four miles away, which also has a café.

A secluded off grid low impact property surrounded by woodland and hills under clear skies with no light pollution. Dee Valley Area of Outstanding Natural Beauty on the doorstep and Snowdonia National Park nearby.

A place to relax, get back to nature and recharge yourself.

Comfort and luxury are not sacrificed in any way with the fully self contained yurts and their fantastic fully equipped kitchen and bathroom facilities lit, powered and heated with renewable/sustainable energy sources (produced on site where possible).

Hot showers and running hot and cold water in both kitchen/bathroom facilities. Wood stoves in both the yurts.

Nestling deep in Cynwyd Forest high in the Berwyn Mountains of North Wales, Greener Glamping is a wonderful place to get away from it all, remember what really matters and who you truly are.

You'll be well away from it all but shops, pubs, restaurants and plenty of attractions and activities are within easy reach.

Book for 4 nights or more and get 5% discount

Book for 7 nights or more and get 10% discount. 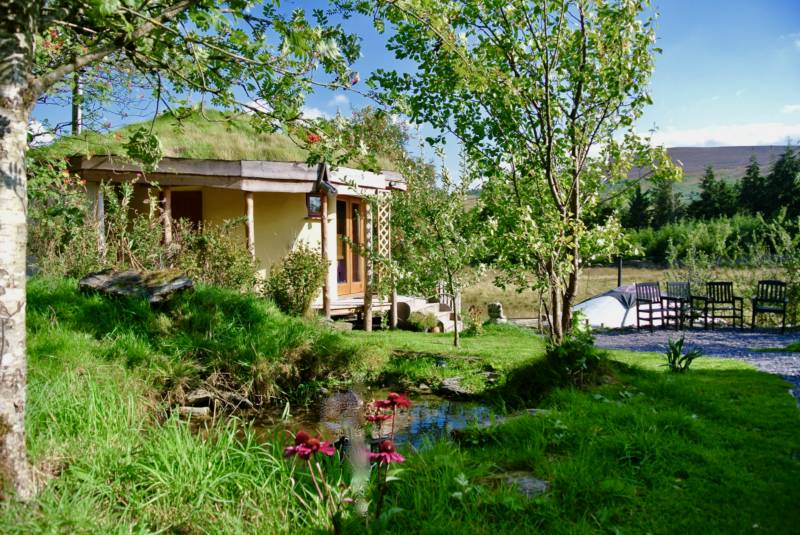 i
Book the whole Greener Glamping site. Both yurts, Ty Crwn Mawr and Ty Crwn Bach Idris along with their respective kitchen, bathroom and outdoor facilities. Sleeping up to 11 guests. 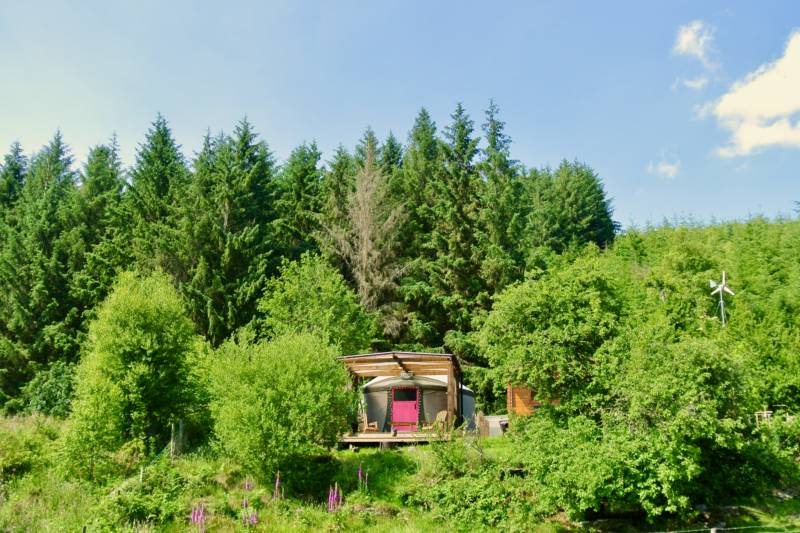 From Corwen, take the A5 and then the B4401 towards Cynwyd. Once you reach the village, look out for the Blue Lion pub. Turn left immediately after passing it (opposite the closed Prince of Wales pub) drive through the square and continue up the road out of the village. After 200m you'll see a sign on the right for Felin Uchaf Campsite. Keep bearing left and come up the hill for 1,000m. Keep your eyes open for the Cynwyd Forest sign on your right and keep coming up the hill. After 500m you'll see a wooden shed, a wind turbine, yurt and log cabin and a sign for Ty Mam Mawr.

The nearest train station is Ruabon. There are buses from there to Cynwyd. Then a 1 mile walk up to the property. Please see directions provided.

Such a beautiful yurt in a wonderful setting. We had a great time! The yurt was so lovely and had all the comforts and the fire made it very toasty. The outdoor space and kitchenette were great and the setting was lovely. We had some beautiful walks in the forest and it was so easy to get out to Llangollen for the day. Beautiful place.
★★★★★

We loved our stay at Ty Crwn Mawr, Nathan is a great guy and can’t do enough for you. The location is perfect, total privacy and serenity. The yurt and surroundings were very clean and cosy, we would definitely return.
Show more 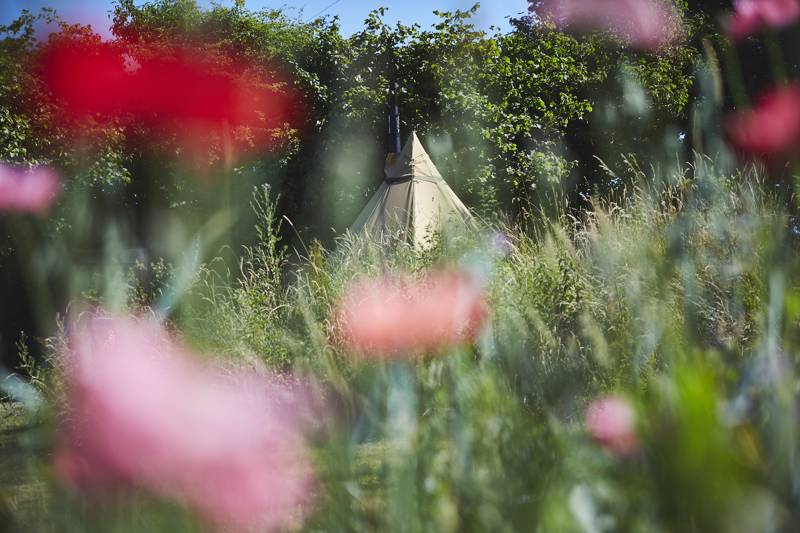 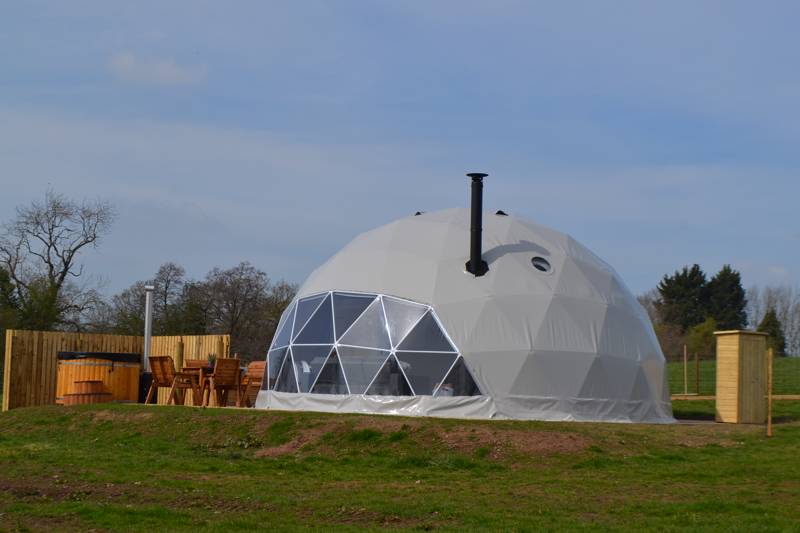